We did not expect a delivery on Saturday, but that is what we got. The school books have arrived and we want to thank you all for praying. We are so thankful to finally be able to get started with this school year. Well, Kati has already started and is already loaded down with lots of homework. Preston said that he will wait until Monday. Monday is his birthday and he has already asked me if he could have the day off! That boy is crazy!
Posted by Cunningham's in Brazil at 4:30 PM 2 comments:

Please continue to pray for our school books. It is now the end of October and we still haven't been able to start school. I am starting to feel pressure to catch up but we haven't even started yet, so that is just a little bit crazy. Kati has been working on health, PE and home economics. Preston has been working on a history curriculum also, but if the books would just get here......
Anyway, I just wanted to enlist your help in praying that they arrive soon. They shipped on September 19, so it could be any day now that they arrive or they could never show up. But we aren't giving up hope. Thanks for praying with us!
Posted by Cunningham's in Brazil at 11:48 AM 1 comment:

The best food ever! 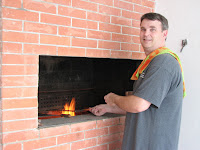 It always seems that the thing I want to talk about most is food. Well, the fact of the matter is that is one of the favorite past times of this family. Last night we had the best churrasco and Paul made it. It was his first time to try it here in PoA and it was wonderful. We can't wait to try it again and expand our cuts of meat. If any of you would like to come down and have a cookout, let us know and we will be waiting on you. The picture here is the grill master at work preparing his fire.
Posted by Cunningham's in Brazil at 5:06 AM No comments: 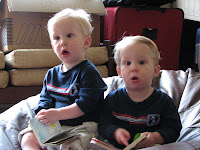 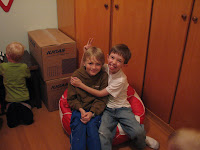 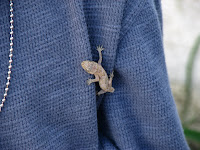 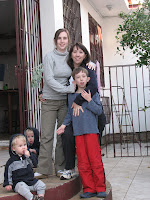 Well, in Porto Alegre anyway! We finally made here here and so far, so good. We took our time driving down here and spend several days in beautiful Florianopolis. The only problem with our stay there was that the babies were awful. We even took Peyton to the doctor because he just seemed like something was wrong. Both of them screamed almost the entire time we were there, but Peyton's scream seemed a little more painful. It did turn out that he had a little bit of an ear infection, so that does explain some of it. We were not able to do anything while we were there, because they just would not stop screaming. We tried to go to the mall and walk around, which they always love, but not then. They screamed and made not just us but everyone around us miserable. They also would not sleep through the night. At least one of them would wake up at least once per night while we there. Ok, now on with the great part of this story...once we arrived here at what is to be our house for the next year or so, both babies were completely "fixed"! It was the most amazing thing I have ever witnessed. The 7 hour drive from Florianopolis to Porto Alegre was fine. The babies did great and didn't fuss too much and took naps and it was ok. Once we walked into this house, they immediately ran in and began playing with toys and acted as though they had been here before and knew exactly where they were --- "HOME". Isn't that awesome? Since we have been here, the babies have slept through the night every night and have been just great. They have been going to bed around 7:30ish and we have been able to just lay them down and they may cry a bit, but they go to sleep fairly quickly. They have been sleeping until 7:30 or 8:00 each morning and they had been waking up between 5:30 & 6:00 like clockwork. I can't tell you how amazed we are, but we are praising the Lord for sure!
We had wonderful missionary friends that prepared the house for us and made it feel like a home. In Campinas, Paul always said that our house was like a concrete cave and that is kind of what it felt like, but here it just feels warmer. As soon as we walked in the house, our first words were things like, "beautiful" & "I love it". Kati and Preston got their own rooms and Preston was so excited about not having to share a room with sister or the babies. It has just been wonderful.
The only thing that has surprised me is the little bit of what we are calling cultural stress. I just wasn't expecting to have a hard time; we were just moving from one city to another. We had already done the new country thing, so this was supposed to be no big deal, right? Well, it has been just a little bit of a big deal. The newness of such a large, confusing city has been overwhelming at times, so we would appreciate your prayers as we learn this new city. We have to learn "our route" around our neighborhood, to the store, to church and trust me when I say it is confusing. Each day and especially each week it gets a little bit better than the one before, but adjusting is difficult. It is nothing like what we went through when we first arrived in Brazil, but please remember us in your prayers. We want to be effective for the Kingdom, but when we feel like we are living in a permanent state of confusion, it is just challenging.
We are currently still waiting on the kid's home school material to arrive so we can start the 3rd and 9th grades. This will help us develop our daily routine and we need to get started, so that can be another prayer request.
Thank you to everyone that has sent emails checking on us, we love to hear from you. I have attached a few pictures of us shortly after our arrival in PoA and will post more soon.
Posted by Cunningham's in Brazil at 4:38 PM No comments:

A beautiful site right outside our door!

We wanted to share with you some of our local wildlife. We have these green parrots that fly over all the time and they are loud, so you know they are coming. But we have never had any stop and visit until the day we took these pictures. These pictures were taking while we were still living in Campinas. Every morning when we would leave for school the last thing the babies wanted to do before getting in the car was look at the birds. There was always some kind of bird in the tree or on the power lines, so we would take a few minutes for them to look at the "pewpews". This was one of our last mornings in Campinas and we were running a little bit late. Well, Kati and I were just going to put the babies in the car without looking at the birds and Pierce would not have it. He was insistent that we look at the birds and I could hear a loud one, but was ignoring it. Pierce and Peyton were not ignoring it. So, I decided to step out from under the carport and let him look for just a minute and when I did what a wonderful surprise. These beautiful green parrots where there squawking at us. They stayed there long enough for us to snap these pictures and then off they flew. 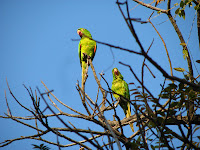 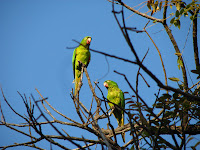 Posted by Cunningham's in Brazil at 4:23 PM No comments:

It is hard to get all of us looking at the camera and smiling!